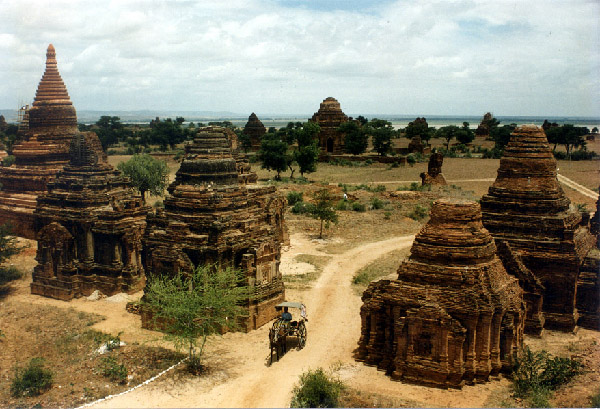 Bagan is just 193 km south of Mandalay in Upper Myanmar. It is on the eastern bank of the Ayeyarwaddy River. Known as the city of four million pagodas, Bagan is one of the richest archaeological sites in Asia. Bagan city covers an area of 42 sq.km. There, one can find over 2,000 pagodas, temples and monasteries built during the Bagan Dynasty founded by King Anawrahta in 1044A.D.

After unifying the country, Anawrahta accomplished another noble deed for the country: he introduced Tharavada Buddhism into Myanmar with the help of Shin Arahan, a missionary monk from Thaton. It was Buddhism that influenced the rulers of Bagan Dynasty to build innumerable pagodas and temples in and around the city. The endless pagodas stand testimony to the rich cultural heritage of the Myanmars and also to the beauty and grandeur of ancient pagoda.

Anciant Bagan is indeed an interesting place to visit for scholars and tourists who have an interest in archaeology and architecture.
Visitors are required to pay US $ 10 for admission to the archaeological zone. US $ 3 is charged for every extra day exceeding 2 days and 2 nights.
Bagan is famous for its artistic handicrafts and lacquer wares. These are among the most popular souvenirs.
How to get there

From Yangon one can take a plane to Bagan. The trip just takes an hour. For one who loves to have a look at the countryside, there is also a motor-way. Bagan is accessible from Mandalay by road: Just a 3-hours’ drive. There is also overnight cruise from Mandalay to Bagan for those who love riverine trip.
Sightseeing

When taking a trip to Bagan, one should not miss, among others, Ananda Pagoda, Shwesandaw Pagoda, Shwegugyi Pagoda, Damayangyi Pagoda and Hti-lo-min-lo Pagoda.
Although Bagan is not the major population centre in the area, it is the tourist centre. There are lots of Lacquerware shops. Bagan is situated right on the bank of the Ayeyarwady. Boats will be passing by or pausing to unload goods, villagers will come down to the river with oxen carts to collect water. Bagan has an interesting market, close to the road.
Bagan Museum

An interesting small museum stands close to the Ananda Temple. It contains a large number of images and other fine works found in temples around Bagan.
Sarabha Gateway

The ruins of the main gate on the east wall, are all that remain of the old 9th century city. The gate is guarded by brother and sister nats, the male on the left, the female on the right. Traces of old stucco can still be seen on the gateway. 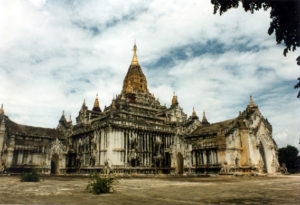 One of the finest, largest and best preserved of the Bagan temples, the Ananda suffered considerable damage in the earthquake and in 1979 reconstruction took place. Built in 1091 by Kyanzittha, the temple is said to represent the endless wisdom of the Buddha. The central square has sides of 53 metres (175 feet) and rises in terraces to a hti 51 metres (168 feet) above the ground. In the centre of the cube, four standing Buddhas, nine and a half metres (31 feet) high, represent the four Buddhas who have attained Nirvana. Only those facing north and south are original, the east and west facing images are replacements for the figures destroyed by fires. The base and the terraces are decorated with a great number of glazed tiles showing scenes from the Jataka. In the western sanctum, there are life size statues of the temple’s founder and his Primate, while in the west porch there are two footprints of the Lord Buddha, on pedestals. 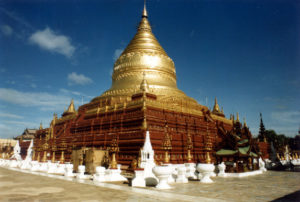 Its golden mass giving it an air of weight and stability, the Shwezigon derives its name from Jeyyabhumi, “Ground of Victory”. Two great kings, noted for their patronage of the Religion, are associated with the Shwezigon: Anawrahta (1044-1077) and Kyansittha (1084-1113).

Tradition has it that the holy tooth, collar-bone and frontlet relics of the Buddha are enshrined in the Shwezigon, the tooth presented by the King of Ceylon, the frontlet obtained from Thayekhittaya near modern Prome. The chronicles relate that Anawrahta placed the frontlet relic on a jewelled white elephant and, making a solemn vow, said, “Let the white elephant kneel in the place where the holy relic is fain to rest!” And it was there, at the place where the white elephant knelt, that Anawrahta built the Shwezigon, although he was to finish only the three terraces before he died.

The chronicles go on to relate that on the accession of Kyansittha, the royal teacher Shin Arahan urged him to complete the Shwezigon. Kyansittha then marshalled all his people and quarried rock from Mount Tuywin in the east to build the pagoda. Marvellously, the pagoda was finished in seven months and seven days, and the chronicles record with some pride, “Shwezigon is famous in the world of men and the world of spirits as far as the world of Brahmas.”

Built by Alaungsithu in 1311, this temple is an early example of a transition in architectural styles which resulted in airy, lighter buildings. The temple is also notable for its fine stucco carvings and for the stone slabs in the inner wall which tell its history, including the fact that its construction took seven months. 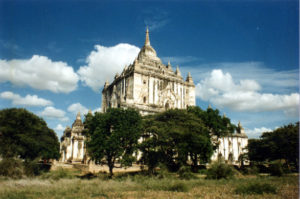 The highest temple in Bagan, the “omniscient” temple rises to 61 metres (200 feet) and was built by Alaungsithu around the mid-12th century. Repairs to earthquake damage were being completed in 1979. Slightly south-west of the Thatbyinnyu in a monastery compound there is stone supports which once held the temple’s huge bronze bell. North-east of the temple stands a small “tally pagoda” which was built of one brick for every 10,000 bricks used in the main temple.
Pitakat Taik

Following the sack of Thaton, King Anawrahta carted off 30 elephant loads of Buddhist scriptures and built this library to house them in 1058. It was repaired in 1738. The architecture of the square building is notable for the perforated stone windows and the plaster carvings on the roof in imitation of Myanmar wood carvings.

Like the Htilominlo and the Gawdawpalin this is a prime example of later, more sophisticated temple style, with better internal lighting. It stands beyond the Dhammayangyi Temple and was built in 1181 by Narapatisithu. The interior was once painted with fine frescoes but only traces can be seen today.
Nathlaung Kyaung

Slightly to the east of the Thatbyinnyu this is the only Hindu temple remaining in Bagan. It was built in 931 by King Taungthugyi, this was about a century before the southern school of Buddhism came to Bagan following the conquest of Thaton. The temple is dedicated to the Hindu god Vishnu and around the outside wall are figures of the “ten Avatars”, Gautama Buddha was said to be the ninth. The central brick pillar supports the dome and crumbled sikhara and once had figures of Vishnu on each of the four sides. The temple may have been built by Indian settlers in Bagan — possibly the skilled workers brought to construct other temples.
Gawdawpalin Temple

One of the largest and most imposing of the Bagan temples, the Gawdawpalin was built during the reign of Narapatisithu (1174-1211) but was very badly damaged by the earthquake in 1975. The reconstruction was started in early 1979. In plan it is somewhat similar to the Thatbyinnyu – cube shaped with Buddha images on the four sides of the ground floor. The top of the stupa, before it fell, reached 55 metres (180 feet) high. The top terrace is still an excellent place to catch the sun setting over the Ayeyarwady.
Pahtothamaya Temple

In this same temple crowded central area the Pahtothamaya was probably built during the reign of Kyanzittha (1084-1113). The interior of this single storey building is dimly lit, typical of this early type of Mon-influenced temple with its small, perforated stone windows. 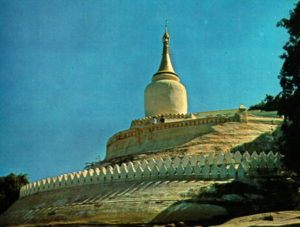 Right on the bank of the Ayeyarwady, this pagoda has been claimed to be the oldest in Bagan, dating from the 3rd century AD. It was completely destroyed when it tumbled into the river in the 1975 earthquake, but has been totally rebuilt.
Mahabodhi Pagoda

Modelled after Indian style temples, this pagoda is unique in Myanmar. It was built during the reign of Nantaungmya (1211-1234). The pyramidal spire, covered in niches each enclosing a seated Buddha figure, rises from a square block.
Shwesandaw Pagoda

Following his conquest of Thaton, this very graceful circular pagoda was built by Anawrahta in 1057. The five terraces once had terra-cotta plaques showing scenes from the Jataka. The pagoda bell rises from two octagonal bases which top the five square terraces. Close to the Shwesandaw stands the Lawkahteikpan Temple – small but interesting for its excellent frescoes and inscriptions in both Myanmar and Mon. 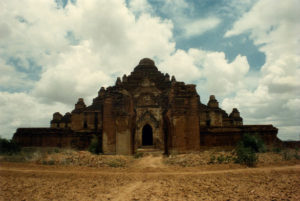 Similar in plan to the Ananda, this later temple is much more massive looking. It was built by King Narathu (1160- 65). The interior of the temple is blocked by brickwork. The Dhammayangyi is the finest brickwork of Bagan.